What Are The Facts Surrounding The Hernia Mesh Class Action Lawsuits?

A number of lawsuits have been filed which are connected to the installation of a hernia mesh as a method of repairing physical damage to the tissue following the removal of a hernia. Hernias are very common injuries and can form in the abdomen, upper intestine, and groin areas, often forming as a result of heavy lifting and repetitive muscle strain.
Often, hernias can be much more than an internal muscle strain and they are difficult to treat without removal, which is the most common solution to the problem. Once the hernia is removed, tissue around the area of the hernia can be significantly weakened, and hernia meshes were developed as a surgical implant to strengthen the post-surgery tissue.
This article deals with several key facts regarding the lawsuits being filed based on defective hernia mesh products that were made available to the public without sufficient testing on humans before market release. 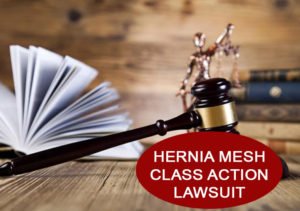 One particular problem associated with defective hernia mesh devices is that they were made by several companies, all of which, it is claimed, have produced defective devices. It is not always necessary for a victim and their legal counsel to establish that one type of mesh was particularly defective. The poor overall quality and unacceptable results many patients have experienced following the installation of a mesh have been seen across all companies and mesh products, to varying degrees. Due to the magnitude of this issue, we recommend that all patients who have received a mesh, even those who are currently not experiencing problems, should have a comprehensive evaluation made of how the mesh is performing and what complications or problems could be associated with the device, now or in the future. Just because it has not created problems does not mean that future issues will not arise, and there could be a statute of limitations concern regarding the time period in which to file.

Companies that have manufactured hernia mesh devices include:

The elapsed time since a hernia mesh installation was performed could be consequential on a case or future claim if not addressed within the specified time frame, which typically ranges from one to five years in most states. On the one hand, the statute of limitations “clock” may be considered to have begun counting down at the point of problems being diagnosed. On the other hand, it may be argued that given the wide publicity surrounding these issues, the clock should begin counting down when the device was installed. Most defective devices have been installed since around 2009, which is why it is imperative to contact hernia mesh lawyers as soon as possible. Most hernia mesh lawyers can have a comprehensive and independent medical evaluation performed by a doctor who understands the typical problems associated with the mesh and what medical issues may develop in the future.

There is any number of issues that could result in complications with installed hernia meshes. One problem is that they are made with inferior materials that can be toxic to the human body, an issue which was not detected prior to the products being made available for physicians to recommend to patients. Infections and loosening of the mesh are common problems, and this can result in significant pain and suffering with little recourse other than removal of the device itself.
Even the necessity of device removal can be the basis for a hernia mesh lawsuit. Not to mention the other complications and potential damage to other regions of the body, including infected organs. The chance of additional problems occurring from hernia mesh surgery is high, to date, these problems include:

Many times the hernia mesh fails to bond satisfactorily to the herniated area of the abdomen, which can also result in a variety of problems including infection of the mesh area and surround tissue/organs.

Compensatory damages for defective hernia mesh devices are typical for most claimants, but punitive damages could also be awarded in more serious cases. A hernia mesh lawsuit can result in significant awards for those who are seriously injured from the device, with compensation often including:

Punitive damages can be recovered in particularly eggregious cases, but most cases are filed as typical product liability cases based on specific claims that the device was:

The problems that have been established with hernia mesh devices are such that everyone who has received a mesh implant should receive a current reevaluation of how well their device is working, including an independent third-party medical professional diagnosis. Just because the device has worked as described up until now does not mean there will not be problems in the future. Even when having regular checkups with a primary doctor or specialist, it is always better to be safe now than sorry later, should problems develop after the statute of limitations expires.

Contact a hernia mesh lawyer at Kellum Law Firm as soon as possible, and, as always your initial case review is free of any charge or obligation.